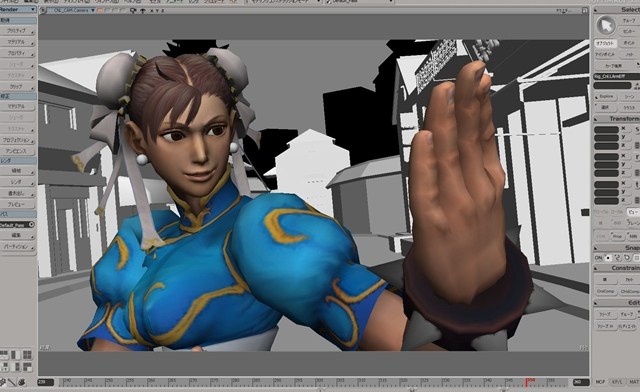 Still with Capcom’s fighter, the more I play it the more I realise the actual animation is merely “functional”, but I imagine that’s what is required to ship a reboot of a franchise where every animation is subject to timing changes for game balancing throughout the project. What appeals most about this visuals are the incredibly solid models and their accompanying rigging and facial poses, so it’s nice to see that the Japanese Softimage site has a page up regarding both these aspects, (with a link to another page demonstrating Resident Evil 5’s volume-retaining arm rig too). Check it out here.

Via the Google translation I see that the game has 25 characters of around 16,000 polygons each, comprising some 5000 animations. The rigging videos are of most interest however, highlighting both their facial & finger sliders and the unique controls for Dhalsim’s squash and stretch limbs. In a break from what I’m used toÂ , the team take a less modular approach to facial expressions, with broad sliders for various facial expressions as opposed to sliders for each area of the face which can afford greater control for the animator but proves more time consuming and being prone to going off-model. This might be a viable approach with such stylised characters however, and they control the following variables: